One out of seven women experience symptoms of depression, anxiety, guilt, irritability or extreme sadness after pregnancy, a condition called Postpartum Depression, or PPD. The Departments of Psychiatry and Genetics at the University of North Carolina School of Medicine wanted to understand why so many women experience PPD as well as the less common but severe condition of Postpartum Psychosis. A better understanding of the causes of PPD is critical to obtaining the knowledge required to develop more effective diagnosis, treatment and prevention. UNC and its international collaborators within the Postpartum Depression: Action Towards Causes and Treatment (PACT) Consortium needed a more effective way to reach women throughout the world who have experienced PPD to achieve large sample sizes. In addition, they needed a way to communicate, screen, and invite some women to provide DNA samples to researchers in order for them to study the genes that may impact PPD. 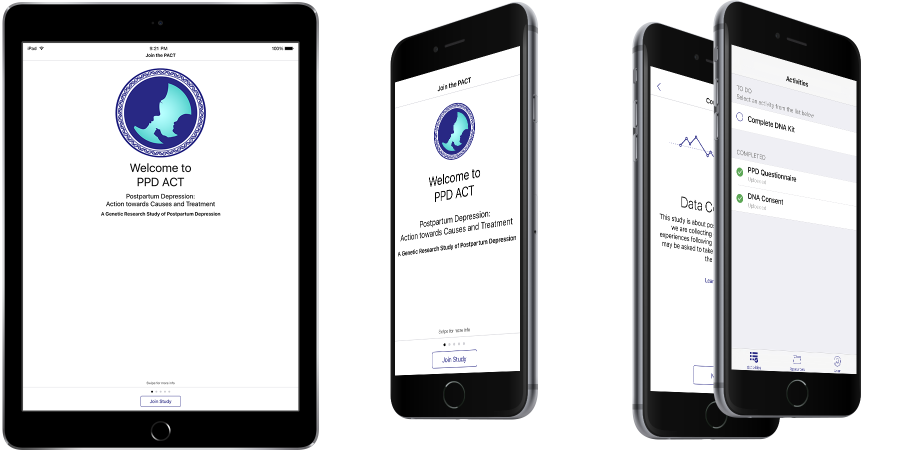 Many researchers struggle to recruit participants for their studies, often defaulting to posting flyers in their local community, with limited results. Penn Medicine sent out 60,000 letters for one study that only recruited 305 women. UNC’s School of Medicine had a much more ambitious goal: 100,000 women worldwide. UNC decided a mobile app would be the best way to conduct their research study.

Given the sensitive information being collected, the researchers needed Institutional Review Board (IRB) approval for the app. The IRB would require proof that the information and privacy of each study participant would be protected. Although not required for this kind of study, the team wanted to match the level of security and procedures requirement for HIPAA compliance, a set of regulations created by the U.S. Department of Health and Human Services (HHS) to protect the privacy and security of certain health information. Little Green Software would need to work closely with the UNC IT security group in order to deliver the app.

Since the research and app development was funded by various grants, the budget was limited. Simultaneously, the project was under time pressure for a quick turnaround in order to have the initial app ready for an international PPD conference and additional marketing opportunities.

UNC was interested in using Apple’s ResearchKit framework as a basis for the app. Released in 2015, ResearchKit’s open source software provides much of the functionality required for a health-based research app. One requirement necessary for IRB approval is a well-designed, clear consent process. ResearchKit provides a skeleton consent process including recording the user’s signature for the consent and storing the consent document along with signature in a PDF file. In order to ensure that each participant fully understands the consent process, a short quiz - given through ResearchKit - was created. Participants are required to pass the quiz, which can be taken as many times as required, before participating in the study.

The core of the study consists of a survey that prompts women to answer questions about childbirth, mood, anxiety levels and other symptoms associated with pregnancy and delivery. Based on responses, some women are invited to give a DNA sample using a “spit kit” provided through the mail by the National Institute of Mental Health (NIMH). The support of the NIMH to provide the spit kits was a critically important part of the study design. The DNA extracted from the spit kits will be biobanked at the NIH biorepositories.

While ResearchKit provides a great starting point for the frontend iOS interface, it does not provide any backend server functionality. At some point, the information gathered within the app needs to be collected in a database for analysis by the researchers. LGS decided to use the IBM StrongLoop LoopBack Framework, which eased the creation and deployment of a RESTful API (Application Programing Interface) that the ResearchKit app could communicate with in order to store the data.

LGS worked closely with the UNC IT team to deploy the server and store the study data in a fully encrypted Oracle SQL database, following the best practice of encryption-at-rest. The encrypted database is accessible only from the server by the server application and designated IT admin staff.

Researchers may access study data through a password-protected administrator’s web portal. The portal uses public/private key encryption to securely transmit authorized study data to the researcher. By encrypting the data with the researcher’s public key, he or she is the only one able to decrypt and view it.

After the initial app was created, the UNC team invited two other research teams to collaborate, one from Australia and one from the United Kingdom. The data access policy and public/private key encryption of study data allowed these additional teams to join the study while meeting their own security and IRB requirements.

LGS and UNC worked closely with Apple in creating this app to ensure it followed the overall ResearchKit guidelines and met the level of quality for ResearchKit apps. Apple provided feedback on the overall user experience and design elements added to the ResearchKit core functionality. Finishing touches were applied, and the PPD ACT app was ready for release. 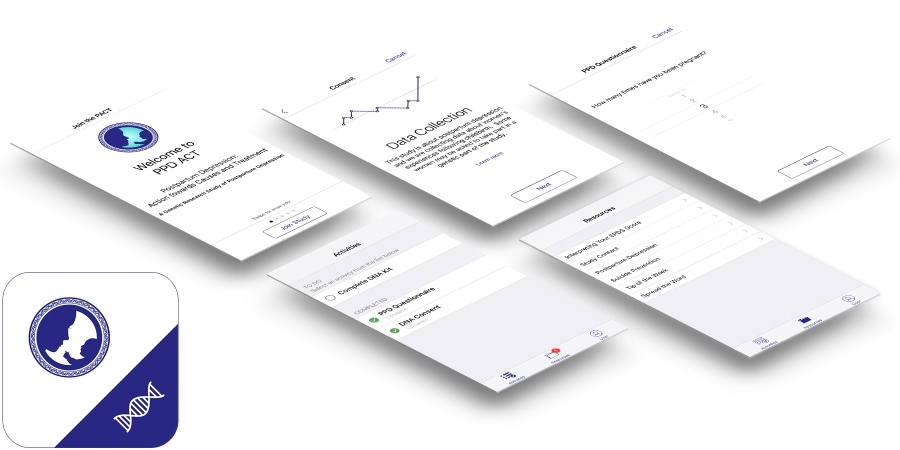 The researchers are hoping that the PPD ACT app will recruit thousands of women for study participation in a timeframe that would be impossible to accomplish using traditional recruitment methods. If successful, the project will phenotype and collect DNA on an unprecedented number of women across the globe with postpartum depression or postpartum psychosis. This will provide the sample sizes needed to conduct genomic studies to understand the genetic signature of PPD.

After the initial app release is published, the team plans to add new functionality and expand the app to other countries.

“We have found Little Green Software to be smart, thoughtful and highly responsive. In particular, LGS has been highly adaptive to the changing needs of the projects and able to problem solve to identify good solutions to challenges that arose. They are highly professional and able to deliver on a tight timeline, critical elements to the success of this project.”